In the center of the capital, near the Red Square, there is a small piece of paradise, a park of incredible beauty: Alexander Garden. In this place you can enjoy the splendor of well-groomed trees, shrubs and lawns, admire elegant fountains, feel the delicate aroma of fresh grass and flowers.

The harmonious interweaving of ancient history and nature, the magnificent architecture and the spiritual atmosphere, all this attracts the Alexander Garden and always captivates visitors.

The Alexander Garden is located behind the Iversky Gate on the slopes of Borovitsky Hill and extends along the western wall of the Kremlin: from the Revolution Square to the Kremlin Embankment.

Once upon a time, the Neglinnaya river flowed here, from the side of the Red Square, a moat was established that connected the Neglinnaya with the Moscow river. Therefore, the Kremlin was surrounded on all sides by water, which made it an impregnable fortress for enemies.

But over time, the river coast began to collapse, to grow with plants, on the banks of the Neglinnaya began to build domestic structures, all this significantly ruined the view. After the end of the patriotic war of 1812, when the restoration of Moscow began after the fire, Emperor Alexander I decided to fill the moat, enclose the Neglinnaya river underground and establish gardens on the site.

Initially, the park was called Kremlin Gardens and only after the coronation of Emperor Alexander II (1856) began to be called Alexander Gardens. At the same time, previously it was said “gardens”, and not “garden”. The fact is that the Alexander Garden itself is three gardens conceived in a single landscape style. 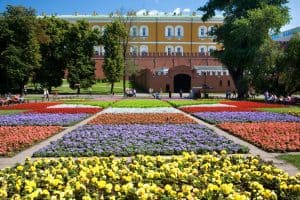 The Upper Garden, 350 meters long, was opened in 1821 (it extends from the Revolution Square to the Trinity Gate).

The central garden, opened in 1822, has a length of about 382 m and extends from Trinity to the gates of Borovitsky.

The shortest garden is the Lower (132 m), opened in 1823 and extends from the Borovitsky Gate to the Kremlin embankment itself.

There are no alleys to walk in the Lower Garden, and there are three alleys in the Upper and Middle Gardens, which run parallel to Manezhnaya Square and the Kremlin Wall. Among them, a large number of ornamental trees and shrubs were planted on the lawn, and numerous flowers delight visitors from spring to autumn in well-kept flower beds.

During the restoration of Manezhnaya Square in 1996, an artificial reservoir with sculptures and fountains was erected along the fence of the Upper Garden, which mimics the Neglinnaya riverbed.

The main source of the artificial reservoir is the geyser. He got this name for planes that fire like geysers.

In the artificial channel of the Neglinnaya River there are also sculptures of several heroes of fairy tales: from a sleeping mermaid virgin to Prince Ivan with a frog.

Tomb of the Unknown Soldier

In 1967, in honor of the 25th anniversary of the victory over the Nazi troops near Moscow, a memorial architectural ensemble was created in the territory of the Upper Garden: the Tomb of the Unknown Soldier. Here the remains of unknown soldiers of the Red Army that the brave died in 1941 were re-buried in the battle of Moscow.

A bronze composition was installed on the tombstone, consisting of a soldier’s helmet, a laurel branch and a military banner.

In the center of the monument there is a labradorite niche with an inscription: “Your name is unknown, your feat is immortal.”

To the left of the tomb is a wall made of Shoshkinsky raspberry quartzite with the inscription: “1941 to the fallen for their homeland 1945”.

On the right side of the tomb there is a granite alley with individual blocks made of dark red porphyry. In each of the blocks is the name of the hero’s city, the stamped image of the “Golden Star”, and inside the blocks there are capsules with the ground of the heroic cities.

Near the monument, the Eternal Flame burns, which was delivered from the Field of Mars from Leningrad.

On the occasion of the 50th anniversary of the victory in the Great Patriotic War, a monument to the Marshal of the Soviet Union Georgy Zhukov was erected in front of the entrance door of the garden.

Today, the Tomb of the Unknown Soldier is a traditional place for tourists and honeymooners.

One of the attractions of the park, reminiscent of the military triumph, is the huge cast iron gate through which you can enter the Alexander Garden from the side of the Historical Museum. 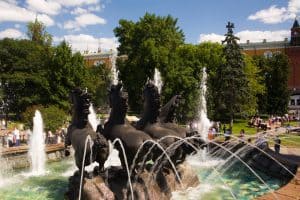 In 1841, at the base of the Tower of the Middle Arsenal, in the center of the Upper Garden, the Ruins cave (author of the project – OI Bove) was erected – a semicircular arch of black granite and red brick, inside – a marble door with four solid columns.

When designing the cave, Beauvais used the fragments of the Moscow houses destroyed by the French army as a building material, as well as a large number of stone cores that were in the Kremlin and were used instead of cast iron cores in the old times.

In the southern part of the cave of the ruins there is a staircase that leads to a site with sculptures of two lions.

In 1913, in memory of the 300th anniversary of Romanov’s reign, an obelisk monument was erected near the main entrance of the garden.

A four-headed obelisk, pointed at the top, was crowned with a two-headed eagle, below: a lion with a sword and a shield, then the Romanov coat of arms, the names of the Romanovs, the shields of the principalities and provinces of the Russian Empire.

At the end of the October Revolution, it was decided that the obelisk would not be demolished, but at the initiative of V.I. Lenin completely remakes: eliminate the symbolism of the king and replace the names of the Romanovs with the names of prominent thinkers, socialists and revolutionaries.

Therefore, the Romanov coat of arms and the arms of the country’s provinces were replaced by a ball, and the obelisk was decorated with relief ornaments with the inscriptions: “Workers of all countries, unite” and “RSFSR “and they received the name of Obelisk” Fighting thinkers. “

In 1966, the obelisk was moved to the central part of the Upper Garden, next to the Ruins cave.

After the restoration in 2013, the obelisk appeared before the Muscovites in its original form.

The monument to Patriarch Germogen is a bronze sculpture on a solid marble pedestal, erected in May 2013 in memory of Patriarch Germogen, whose role in the history of Russia in Time of Problems is of close importance to the roles of Minin and Pozharsky.

On both sides of the pedestal there are bronze bas-reliefs, which represent: the scene of the election of M. Romanov as king of Russia; The scene of the expulsion of the boyars by Patriarch Hermogenes, who asked him for blessings to become a citizen of Vladislav, the Polish royalty.

Behind the monument, on a separate pedestal, there is an inscription that tells the story of the creation of the sculpture.

Under, surrounded by the Neglinnaya river and the moat, with the only doors that were closed with a drawbridge in case of danger, the tower was a formidable obstacle for those who besieged the fortress. In the tower door you can still find grooves for lifting mechanisms.

The tower had its current appearance at the end of the 17th century, when it was decided to decorate it with an openwork crown with individual white stone details.

At the moment, Alexander Garden is one of the favorite vacation spots for Muscovites and guests of the capital.