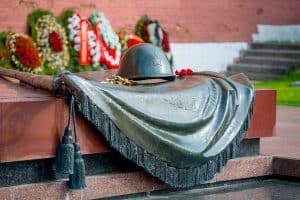 After the bloody end of World War I in the early 20th century, a tradition arose according to which the state erects a monument or an obelisk, as a symbol of memory and in gratitude to the fallen heroes whose names cannot be established.

The Unknown Hero Monument first appeared in London in 1920. The Unknown Hero memorial complexes are located in Paris under the Arc de Triomphe, in Washington at the Arlington Cemetery, and in several other countries.

To commemorate the festivities on the occasion of the 25th anniversary of the crushing defeat of German fascist forces near Moscow on December 3, 1966, the ashes of an unidentified warrior hero were taken from the soldier’s grave in Leningradskoye Shosse, honored and Triumphantly buried in the Kremlin wall.

On May 8, 1967, during the days of the Great Victory Day, at the burial place, the symbolic Monument to Military Valor took place: the “Tomb of the Unknown Soldier”.

According to the plan of the creative group of talented architects, the commemorative set was created by the sculptor-muralist Nikolai Tomsky.

The same day, since the fire on the Champ de Mars, L. Brezhnev lit the Eternal Flame in the Alexander Garden.

The Alexander Garden in the gallery of the central metropolitan parks occupies a special place. A popular 10-hectare recreation area is located on the northwest side of the Kremlin.

The composition of the architectural and commemorative ensemble “The Tomb of the Unknown Soldier” in the Alexander Garden is a tombstone with a mounted soldier’s helmet and a symbolic branch of laurel, resting on a falling battle flag.

In a niche of an ornamental labradorite, a memorable inscription on the epitaph reads: “Your name is unknown, your feat is immortal.” And from the five-pointed bronze star, the Eternal Flame of Memory “splashes”. According to one version, the author of the inscription is Sergey Mikhalkov, according to another, this is the result of collective writing.

To the right of the commemorative composition there is a granite alley symbolic of the glory of the cities: dark red porphyry plates with the name of the city and the “Golden Star” in relief. The capsules with sacred earth, which was delivered from the defense lines of the heroic cities, are stored inside the plates.

The left side of the Monument to the Unknown Soldier is a dark crimson hued Karelian quartzite wall with a symbolic dedication: “1941 to the Fallen for their Homeland 1945.”

To the right of the heroic cities memorial alley is a block of red granite trails on a pedestal. Its golden inscription reads: “Cities of military glory.” Now this title has been awarded to 45 Russian cities for their special value and heroism in the fight for freedom of the Fatherland. The stele, which appeared after the reconstruction of the monument in 2010, with a length of approximately 10 m and a height of just under 1 m, on the left has the text on the left side “Cities of Military Glory”, on the right – their names are carved, placed in a dozen columns.

Since December 1997, Post No. 1 of the Honor Guard has been relocated from the Mausoleum to the Memorial. The military of the Presidential Regiment watches day and night, changing every hour.

In 2009, the Presidential Decree “The Tomb of the Unknown Soldier” received the status of a monument commemorating military glory of national importance. 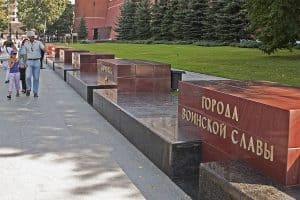 At the entrance to the Alexander Garden is the Tomb of the Unknown Soldier, the main war memorial in Moscow. It is conceived as a monument to all fallen soldiers, and especially those whose names have remained unknown. The grave of an unknown soldier near the Kremlin walls appeared in 1967 in honor of the 25th anniversary of the defeat of German troops near Moscow.

Alexander Garden Mini-Guide The ashes of an unknown soldier who died in the winter of 1941 at kilometer 40 of the Leningrad highway during the defense of Kryukovo were transferred here. Then the enemy was thrown from the capital. The authors of the monument The Tomb of the Unknown Soldier are Nikolai Tomsky, Yuri Rabaev and Dmitry Burdin. On the tombstone there is a symbolic sculptural composition: a laurel branch and a soldier’s helmet on a banner that falls in heavy folds. In the center of the monument there is a niche with the inscription: “Your name is unknown, your feat is immortal.” The author of these lines is Sergey Mikhalkov.

The niche is made of labradorite with a five-pointed bronze star, in the center of which burns the eternal flame. A torch for the grave of an unknown soldier near the Kremlin wall was lit with eternal flames on the Field of Mars in Leningrad. The torch was delivered on the staff, and there was a living corridor along its route: the people considered it their duty to pay tribute to all those who died in the war. The delegation was led by legendary WWII pilot Alexei Maresyev.

The creators of the eternal flame in Moscow had two tasks: first, the high flame was supposed to glow white, yellow, and red. Second, the fire was supposed to burn constantly. The variety of colors was achieved with inadequate combustion of gas, when an air shortage forms. In this case, jets of different colors are born. And to maintain combustion, a torch protection system was created, which guarantees its reliability in the event of rain, wind and snowfall.

The eternal flame and the guard

It is known for a fascinating ritual of tourist change that takes place every hour. Everything is verified here, down to every inch: from the Walk of Fame to the Eternal Flame, the guard takes exactly 108 steps. This printed step, presented by Pablo I, is the hallmark of the presidential regiment. Position number 1 (two sentries) in the Mausoleum of V.I. Lenin was founded on January 26, 1924, and as early as 4:00 p.m. the next day, the first sentries stood on a pole near the coffin with Lenin’s body in Red Square. Only the best cadets could receive the right to guard the Mausoleum.

But after the events of October 3-4, 1993, the guard near the Mausoleum was withdrawn. At 4:00 p.m. on October 6, 1993, a sergeant O.B. Zamotkin removed the last sentinel turn from his post. But after a few years, the Tomb of the Unknown Soldier became the permanent site of the country’s main honor guard, and already on December 12, 1997 at 8:00 AM the first sergeant, Sergeant M.P. Volgunov brought to the country’s main post the first shift. And to this day, the military of the presidential regiment monitor the memory next to the Kremlin wall.

They are also selected here according to external signs: tall young men (growth not less than 180 cm), Slavic type, without scars on the face, with a calm and confident look. But the detachment of soldiers near the eternal flame is only apparent. If necessary, they will fight. South of the monument along the Kremlin wall are quartzite blocks dedicated to twelve heroic cities (Leningrad, Odessa, Sevastopol, Stalingrad, Kiev, Brest Fortress, Moscow, Kerch, Novorossiysk, Minsk, Tula, Murmansk, Smolensk). Each block is crowned with a stamped Gold Star medal and stores a capsule with earth from the battlefield.

The flow of people to the Tomb of the Unknown Soldier does not stop: according to tradition, the newlyweds put flowers here, and every year on May 9, the presidents of the Russian Federation and the country’s top officials put wreaths on Tomb.