The memorial project on Poklonnaya Hill was created in 1942, but then, for well known reasons, it was impossible to implement. It was inaugurated only on May 5, 1995, in commemoration of the 50th anniversary of the victory over fascism. The Victoria Museum is located in the Victors’ Square, to which the central alley leads.

Until the summer of 2017, it bore another name: Central Museum of the Great Patriotic War.

The museum’s exhibition is divided into four rooms. In the Hall of the Commanders, when the museum’s exhibition opens, the names of the high command personnel and the Knights of the Order of Victory are immortalized. Zhukov, Konev, Malinovsky, Montgomery, just part of a galaxy of famous commanders who “know” museum visitors.

In the Hall of Fame on white marble slabs, the names of 11,800 heroes of the Soviet Union are immortalized. In the center of the room there is a bronze sculpture of the “Soldier of Victory”, on which the “Order of Victory” shines.

Dim light, strands of beads that descend from the ceiling like tears, the sculptural composition “Pain” is the Hall of Memory and Pain. Mozart’s “Requiem” complements its atmosphere.

In the military-historical exhibition “The road to victory”, objects were collected that speak about the course of the Great Patriotic War in the rear and on the fronts, exhibitions: weapons and newspapers were collected from that time, the interior was reproduced from the commander’s headquarters.

The pearls of the museum are six dioramas:

Counterattack of Soviet troops near Moscow in December 1941
The battle of Stalingrad. Fronts
The Leningrad blockade.
Battle of Kursk
Forcing the Dnieper
Assault on Berlin

Each of them is accompanied by its own audio composition, which transmits the atmosphere of the event represented.

The “Book of Memory” department was created specifically to perpetuate the names of those who died and disappeared during the Great Patriotic War. 1500 volumes of the Memory Book of the entire Union are stored here.

On New Year’s holidays, many museums in Moscow worked for free. But for some reason, the Museum of the Great Patriotic War did not fall in number, but it turned out that we were in Victory Park and suddenly we remembered that we had never been to this museum. Yes, the entrance was paid, but there were not many queues, people and the museum itself.

In addition to the main building of the museum, there is a branch in Parque de la Victoria: an exhibition of outdoor military equipment, as well as the exhibition “Engines of war”.

In the museum you can take photos with real weapons.

The Great Patriotic War Museum occupies a large four-story building, and each floor has its own exhibits. It will take about 3 hours to move. On the ground floor, near the changing rooms, there is an active trade in toys, mainly weapons and everything related to them. People come to the museum as families, and there are always many children crowded around the windows. Therefore, parents, prepare to pay!

The museum sells toys for children, mainly weapons and everything related to war.

I liked the first floor of the museum more. Here are the dioramas. There are six of them, but one was closed for restoration. Under the panorama there are five dioramas (clickable). In photographs it is almost impossible to distinguish what is drawn (it is the background) and what is not. The scenarios turned out to be good, but not excellent, so sometimes I had to use Photoshop. In some places it is clearly visible, do not scold too much, if that :-).

On the second floor, the exhibits are allocated a lot of space. The main space is occupied by a large hall and stairs that lead to the third floor, where the main exhibits are presented.

In one of the windows on the second floor I noticed a ring with a skull. I heard a little about such rings, and Google discovered that this is one of the Dead Head rings that G. Himler personally granted to the SS members.

Hall of Fame in the Great Patriotic War Museum 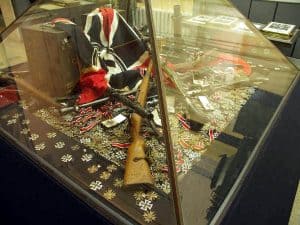 We go up to the third floor. Its central part is occupied by the Hall of Fame, a round hall where the names of all the heroes of the Great Patriotic War, as well as the heroic cities, are indicated on the walls. And around this room is the main part of the exhibition.

On the last fourth floor there are portraits of generals and marshals of the Soviet Union, as well as busts of heroes of the USSR. In addition, a large room is reserved for exhibitions. During our visit, an exhibition dedicated to the Patriotic War of 1812 was held here.

Monday is the day off. A health day is the last Monday of each month.